Oleh redaksi
Jakarta: Governor of Jakarta Anies Baswedan met with the Mayor of Rotterdam, the Netherlands, Ahmed Aboutaleb, at Jakarta City Hall to discuss the challenges faced by the two cities after the pandemic as well as explore collaboration.

“This morning, I have the honor to receive Rotterdam’s Mayor, Mr. Ahmed Aboutaleb, who is also a delegate in the Urban 20 as part of the G20 activity. We discussed many things regarding the challenges of today and in the future as well as increasing collaboration,” Baswedan informed at Jakarta City Hall here on Monday.

He said the main issues they discussed during their meeting were related to urban planning, water management, and urban development, considering that Rotterdam’s geographical conditions are almost similar to Jakarta.

“Rotterdam is a city that has the same challenges as us. A city on the coast with sea level problems that are also similar to those experienced by Jakarta,” Baswedan added.

He said that many representatives from the Jakarta provincial government were sent to the Netherlands to study urban planning under a cooperation program.

“They gained experience from the community and city managers, especially in Rotterdam about water management, which later became a lesson for our team here,” he added.

In addition, he said that during their meeting, they also discussed general issues and global developments.

“I also chatted with Mayor Aboutaleb regarding inflation, water, and food issues. We had quite a broad discussion,” Baswedan disclosed.

Besides receiving a visit from the Rotterdam Mayor, Baswedan was also scheduled to meet with representatives from Berlin city, represented by the state of Berlin delegate to the federation permanent secretary for active citizenship, democracy support, and international relations, Ana Maria Tr Snea. 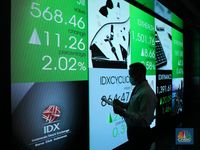